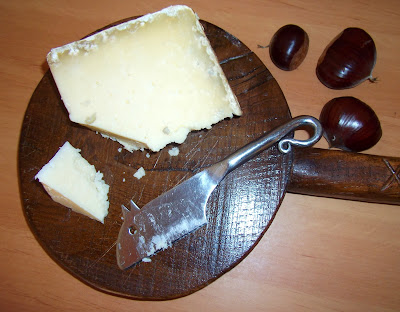 Frankly, Cantal cheese has always been a bit of a wishy-washy, rather tasteless, version of English Cheddar.

There are 3 versions of Cantal; jeune (1-2 months old), entre deux (2-6 months old), and vieux (more than 6 months old). The old is usually sold under the name of Salers (see here)

I think that someone must recently have been having a wee word in the major Cantal producers ears, because over the last couple of years the entre deux has radically improved and become a much more rounded cheese. There is often a slight blush of blue towards the exterior crust, which is usually a good sign of flavour; and the cheese texture itself has now become crumbly, whereas before it was soapy. Maybe they are now keeping it for the full 6 months, instead of flogging it off at 2.

Cantal is the standard cheese of France. It is eaten in sandwiches, thrown into omelets, and grated over anything that requires a cheesy topping. It's the standby cheese that is usually found in every French fridge.

I recommend the entre deux, but only if your local shop has run-out of good Mature Cheddar!