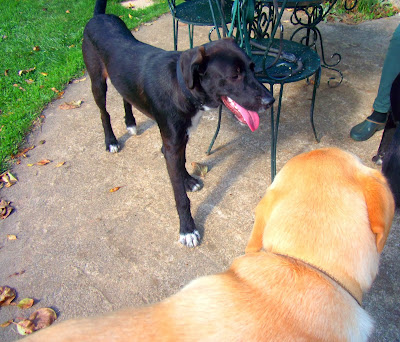 Black coat, nice pink tongue, and two white gloves; he looks the spitting image of our Bok (albeit thinner).

In fact this is Iggy Pup, the new-boy on the block. He lives about 500 metres away, and has immediately befriended the boys.

Our house seems to have been a magnet for other people's dogs over the years; some nice, some dreadful. One, a big beast called Solo (need I say who's dog he was!!) was a vicious bastard. We'd often have to lock the children and ourselves in the house until he'd gone for fear of being savaged. He used to wear a big black muzzle, but this didn't stop his aggression. He was a nightmare!

Luckily most have been very pleasant. We never feed them, nor do we make a fuss of them; they just turn up, play a while with our two, then go.

This present visitor (in fact there are 2 other new visitors as well) is a nice dog. He plays with Monty just as Bok used to do when they were both pups themselves.

Nowadays we have to look quite closely at Bok and Iggy Pup to know which is which.