From Weed, to Food, to Weed again. 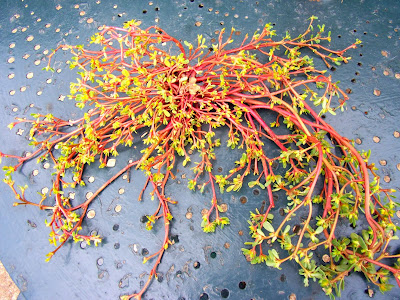 These wretched ground-hugging weeds, some of which I've found growing to a diameter of about 4 ft, have decided that the newly turned soil up at the barn is just perfect for them to establish themselves 'en masse'.

I was recently showing some of the more invasive individuals to a friend (St Theresa of the Floral Tribute), when she just happened to remark that it might be edible. Well, as you can imagine, this got me very excited.

I looked it up on Wiki, watched a short YouTube film about it, and eventually decided that 'Yes', it was definitely PURSLANE.

Greater knowledge than mine suggested that both the red stems and the small paddle-shaped leaves are edible. So I picked a plant with large leaves, and had a go.

Frankly it's DULL, uninteresting, nondescript. It has no real flavour, and to be perfectly honest I'd only eat it in a dire emergency; although I understand that it does have some favourable nutritional qualities.

It has now (disappointingly) re-joined the ranks of inedible 'weeds'. If anyone can convince me otherwise; I'm always open to being convinced!