Not for the 'easily shocked'! 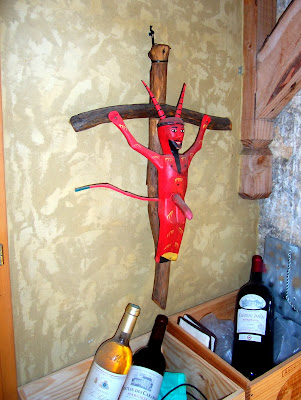 There is one corner of the studio that I have not previously photographed. Not only is it where I keep a few bottles of elixir, but it is also home to this rather odd, and slightly rude, 'artefact'.

My youngest, Wills, was somewhere in either Mexico or Guatemala when he came across it at some village market. He bought several of them and had them shipped back to the UK as curiosities. The original supports (crosses) were soon eaten away to dust by South American bugs, and I replaced mine with some rustic bits of Chestnut.

I really have no idea what it is supposed to represent; but I can imagine!

If you own something similar, or have any information about its origins, I'd be most interested to hear about it.