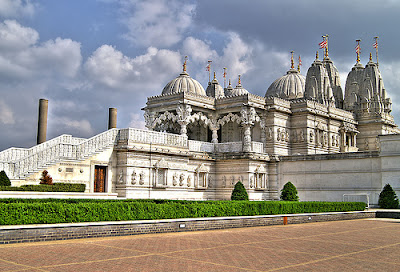 I've always been fascinated by Indian architecture, and Hindu temples in particular. The attention to the tiniest detail is staggering.

People often look at ancient English cathedrals, and despair at the loss of once great craftsmanship. Well let me assure them that the craftsmanship is still there, it's just the willingness to spend the cash that's missing.

This temple is quite new. Its building began in 1992, although the carving itself was started almost 3 years earlier in 1989. The temple was finally opened in 1995. 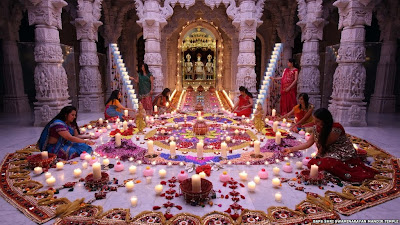 So, where is this beautiful temple? Well it's in North West London, in Neasden, quite near Brent Cross where the M1 motorway heads north from the North Circular. When first built it was the biggest Hindu temple outside of India.

It often took the ancient European cathedral builders centuries to build their wonderful edifices; it took 1500 modern-day Indian craftsmen just 5 years to carve the giant Neasden Temple. Every piece of Carrara marble and Bulgarian limestone was shipped to India, hand carved, then shipped back over to England where it was later assembled.