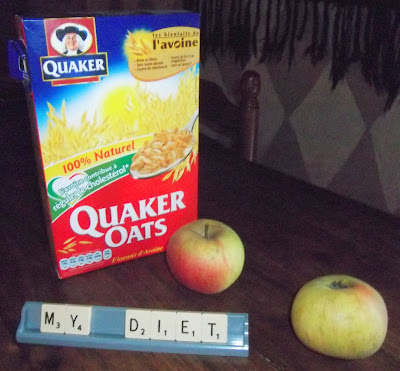 So.....I've known for some years that I'm Type 2 Diabetic. Originally I was given some pills to swallow, but I decided to abandon these, in an attempt to control my problem with diet alone.

I have recently had a thorough blood test, and although it confirmed that my diabetes does require treatment, the rest of me seems roughly OK. I now have just one more pill to take (twice a day).

However, I'm still convinced that paying quite strict attention to ones diet can have a huge effect on diabetes, and this doesn't mean eating nothing but bland zero-calorie yuk.

Some time back I considered following Prof Roy Taylor's 600 calorie, 3 month diet, but was warned that this could be dangerous. Instead I now intend to follow Dr Michael Mosely's 'The Fast Diet', where one eats 'sensibly' for 5 days a week, and reserves 2 non-consecutive days for fasting; 500 calories for women, and 600 for men.

I'm sure that Lady Magnon won't mind me saying that both she and I could happily lose a few pounds, and the diet is basically for this purpose. However, I'm assured that the fasting can have a beneficial effect on diabetes, blood pressure, and cholesterol; even if it's followed for just 2 days a week.

So, my beloved Charcuterie is banned for the moment, as is cheese, bread, and just about anything that contains sugar. My breakfast now consists of Rolled Oats with milk, instead of fried eggs, bacon, and black pudding. Lunch will be pretty much as before; usually a vegetable soup. And dinner 'much more sensible'.

Will it help? Maybe; I'll let you know when I have my next blood test in 3 months time (just right to stop me enjoying Christmas).