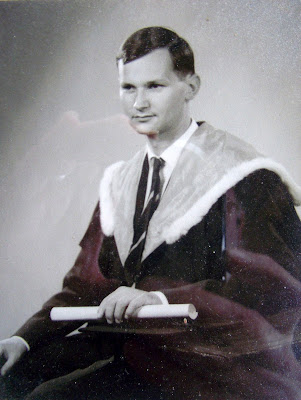 Exactly 36 years ago, on the 10th May 1977, my lovely cousin Stephen was brutally murdered in his own home. A 16 year old youth (his next door neighbour) had broken into his house in British Columbia; my cousin challenged him, and was rewarded by being stabbed 15 times. He died at once with one of his young daughters watching in horror.

Stephen was a brilliant doctor. He'd moved to Canada in 1972, and had already become one of the country's top practitioners. Within five years he had become an important advisor to the Canadian government, as well as the director of intensive care at a major hospital. At just 42 his ever advancing career looked to have no bounds.

But a young thug stopped all that. His desire for free drugs put an end to the life of an unquestioned medical genius.

The above photo sits on my sitting room dresser. I look at it every day of my life, and think of him. For me it exemplifies his academic prowess, his ingrained determination and intelligence, and his deeply caring personality.

I could write a long list of all his achievements and honours, but I'd need to be here all day; I've also greatly reduced the amount of letters after his name above. Outside of medicine he had a pilot's licence, he assisted the Canadian Mounted Police, and he was a member of numerous committees. Whenever and by whoever his knowledge and wisdom was needed, he willingly answered the call.

So, today, on the anniversary of his death, I shall be thinking of him, and missing him. It's been 36 years since the tragedy, and I still haven't recovered from the shock. I have no information about his murderer, or of what sentence he might have received.

RIP my lovely cousin Stephen. From the moment he left us, the world has been a much poorer place.