The snows have gone and yesterday, when the sun was shining, it was almost Spring-like. So I went up to the Séchoir to inspect the new drive more closely. I must say, I'm very pleased with my JCB man's work. I told him I wanted it to be NEAT, and neat he has done.

The area on the right, where he has deposited all the earth, will (when levelled) become a new orchard. I shall plant peaches, figs, cherries, pears, plums, and apples. I've not yet decided what, but ONE amongst them will be planted on June 5th to celebrate the Queen's Diamond Jubilee; maybe a pear, as they usually become magnificent trees (There's some corner of a foreign field, etc). 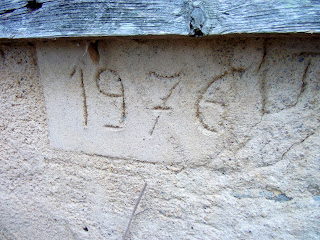 Whilst up at the barn I happened to notice this roughly etched date (1976) on the back wall; it had previously been hidden by brambles. I'd always wondered when it was built; now I know. I was living just 300 metres away in '76, but I don't remember it going up. Maybe I was just too  busy with other things.
Who would have thought that 36 years later, I would end-up as its owner. Even my own life never fails to surprise me.
Posted by Cro Magnon at 05:57