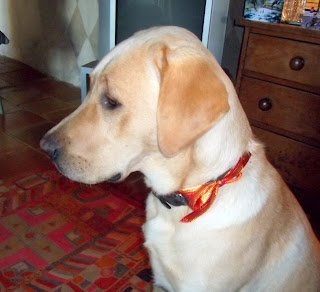 Lady dogs tend not to be too picky when it comes to choosing a father for their pups. We know that Monty is (at least) half Labrador; but what on earth could his father have been? Here are some clues.... 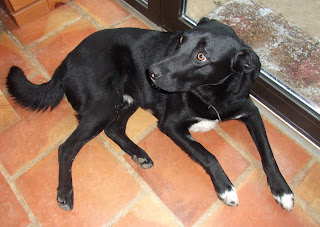 And Bok; well he looks and behaves rather like a Border Collie, but he obviously isn't 100%. Any ideas? Again, a few clues...

1. Loves chasing horses and cars.
2. Insists on putting his two arms up on your chest at all times.
3. Very affectionate.
4. When concentrating he lifts his left arm backwards (like a Pointer).
5. Sleeps very, very close to the blazing fire.
6. Never goes for a pee in the early morning.

I suppose, in reality, the only way of knowing their other parental halves would have to have been there at the right moment. And seeing that no-one was, it's simply a matter of guess work! All guesses welcome!