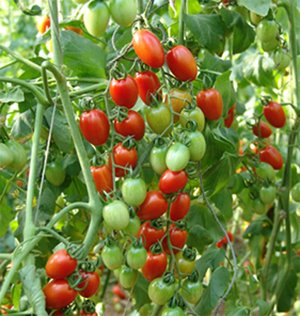 At Haddock's, last autumn,  I made a DREADFUL MISTAKE.

Last year I planted three different varieties of Cherry Tomato (one of each). One was small red and round, one was yellow and pear shaped, and the other was red and oval. All three grew to become HUGE bushes, and bore so much fruit that eventually I just grubbed them up, and put them on the compost (after already having consumed huge amounts). My conserves I then produced mostly from the Italian (Roma), Portuguese, and French (Marmande) varieties, of which I also had mountains.

I should, of course, have put these wretched plants on the bonfire; as NOW, having spread said compost throughout the whole of Haddock's, I have MILLIONS of tiny tomato plants, all desperate to create some new-style LAWN over the entire plot. The hoeing has become a nightmare.

All gardeners learn by experience, and this has certainly has been one for me. As I so often say; 'I should have known better'. This year I've simply selected three self-sown plants (which I'm hoping will be differing varieties), and when done with, they won't be allowed within 50 metres of my compost. No siree; they'll be transported as far away as possible, and all the dropped fruit that has to be raked up will be buried in a very deep hole (several miles away).
Posted by Cro Magnon at 05:31