Today, Feb' 11th, was my dear mother's birthday. Were she still alive she would be 104 years old today (actually she would have been 107). 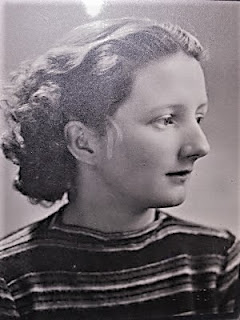 There was nothing particularly special about her; she was simply my mother.
Her favourite saying was "Be easy, but if you can't be easy, be as easy as you can". I've always tried to live by that maxim; and I think quite successfully.
She was part Welsh, but, frankly, was far more English than Welsh. She had no hint of a Welsh accent. However, she was very proud of being a distant cousin of Wales's most famous writer (in Welsh) Islwyn Ffowc-Elis. Her Welshness was limited to always calling me a Mochyn budr (Dirty Pig); which I was! Plus all the usual greetings and farewells.
She had been something of a free spirit in her youth. With her friend Pud Cumpsty she bought an old Gypsy caravan, for weekends, which they parked on top of a hill overlooking the rolling Welsh hills, the caravan was reached by means of a Velocette motorbike, which I believe they also bought together. Many years later she bought a cottage on almost the same spot, no doubt to rekindle old memories.
I suppose my mother's most interesting achievement in life was knowing the Latin names, common names, and regional names, for most garden plants. Her knowledge of unusual regional names was quite extraordinary, and it's a shame that she never wrote it all down.
However, her two 'great claims to fame' were, firstly, as a wartime Red Cross Nurse she was the only one to deliver a baby on the pavement. She was working in Dormansland, a Surrey village where many of London's pregnant women were sent to be away from bombs, and give birth. Secondly she discovered a plot by German Prisoners of War to escape their camp at Lingfield Racecourse. Whilst walking her dog, she'd noticed a build-up of earth in a small stream, and tipped off the guards. They found a tunnel, and all was well. She received several letters from The Queen for her nursing work, but just a vague thank you for foiling the escape plot.
I wish her a very Happy birthday, which sadly will go unheard.
Posted by Cro Magnon at 05:18