Making the most of it. 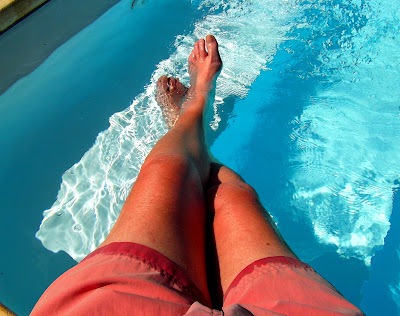 It's stinking hot here, and just about to get worse; but life goes on.

Look; we've got our silly masks, enough pasta for until Christmas, there's still some of that hand gel stuff in the car, and we keep our distance from our fellow man; we'll probably/possibly survive. We survived the Brexit saga, but still have to face the possibility of being kicked out of France sometime next year. Life has its ups and downs, but we go with the flow.

I don't require much. A rain-proof roof, a decent bed, and three meagre meals a day, are my simple demands.

We've never wanted big flash cars, a yacht moored in Monaco, or a modern Essex-style Footballer's 'Executive Home'. We lead a very busy but simple life, and over the years have managed to save enough for one or two occasional treats. We're not people who demand permanent luxury.

Some might see our pool as a luxury, but, in fact, it's just a hole filled with water, and probably cost about half the price of a new kitchen extension or conservatory; and those would never be seen as 'luxuries'.

I do occasionally hanker after an ancient white-painted fisherman's cottage overlooking a small bay on a tiny Greek island, next door to a simple taverna (which I would definitely see as a luxury), but I think I'll now have to give that a miss. I'm getting too old for such folly.

No, I'll stay where I am, try not to be jealous of others on that Greek island, and be grateful for what we have. We're not poor, and we're certainly not rich. It's all a question of making the best of what one has, and we do that to the best of our abilities. I recommend it to others.
Posted by Cro Magnon at 04:17