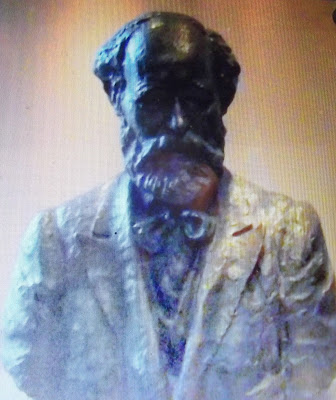 This, I hope, will be my final posting about the Floyd/BLM affair. I'm not only extremely bored by the whole business, but I'm also disgusted by the behaviour of just about everyone involved. I quite expect most people feel the same.

Anyway, let's have some fun this morning. I am prompted by London actress Ms Imarn Ayton, a figurehead in the BLM movement, who has stated unequivocally that "A monument to anyone who has made racist comments is offensive and MUST be removed"

So, here's an interesting little question, for these interesting times; who was the nasty man who said these three horrible things about Immigrants and Jews?

1. "Russian immigrants either teach us to how to live on garlic and oil, or introduce The Black Death".

2. "Immigrants are a batch of men sent from their homes into our midst for the purpose of bringing us down, if possible to their level. They have filthy habits".

3. "Wherever there is trouble in Europe you may be sure that a hook-nosed Rothschild is at his games somewhere in the region".

I'm sure you'll agree that this type of vile racism towards Russian immigrants, and Jews, cannot be tolerated. Ms Ayton certainly agrees with me.

So, who said these things? Yup; none other than the darling of the left Mr Keir Hardie himself (after whom Sir Keir Starmer was proudly named). Keir Hardie was the creator, and erstwhile leader, of The Labour Party.

At the heart of the BLM movement, should be EQUALITY and FAIRNESS in all matters. With that in mind, I think it's about time Hardie's bust in parliament be removed.

So, I'm with you Ayton, there should be no place for the busts of overt racists in the corridors of Westminster. Let's do the decent thing, and rid parliament of this vile racist's image.

N.B. I didn't start all this nonsense; I'm simply trying to lead it to its natural conclusion.