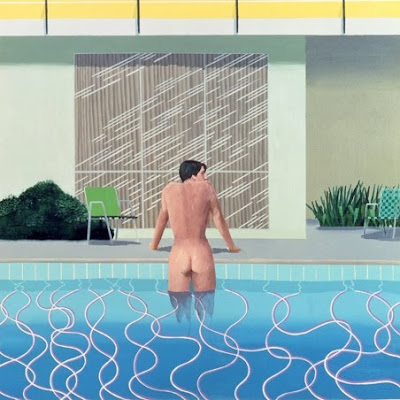 This picture, by David Hockney, is of Peter Schlesinger (his boyfriend at the time) getting out of a swimming pool in Los Angeles. The pool was owned by an American gallery owner (called Nick), but you knew all that!

I'd been to David's 1970 retrospective at London's Whitechapel Gallery, and he'd invited me for tea that afternoon.

David lived in a first floor flat, in a rather dour and unassuming house in Powis Terrace, Notting Hill, but the inside was quite different. He'd managed to buy the first floor flat of the house next door, and had knocked the two into one, creating a huge space. His studio was large and airy, and on the day of my visit he was working on a painting of a couple in The Luxembourg Gardens with their backs to the viewer. I don't think I've ever seen the finished job.

When it came time for actual tea, David reeled off the most staggering choice of different flavours; predictably I chose Lapsang. The tea was made, and served, by the lovely Peter (seen above getting out of Nick's pool), who was wearing an apron and not much else.

It's possibly worth noting that on the day of my visit, David's studio was totally empty (other than the job he was working on). Later that same week I was invited to tea by artist Ivon Hitchens at his ramshackle Sussex home; the place was piled high with framed paintings. David sold everything as soon as the paint was dry; the great Ivon presumably didn't.

When I left Ivon, his wife gave me a huge peony from her garden, but by the time I'd reached home it had completely fallen apart; beauty so fleeting. Ivon died not long afterwards; David, of course, is still going strong.

I like to think that I keep the Ivon approach to work alive; I also have a pile of unsold paintings.