A question of Sex. 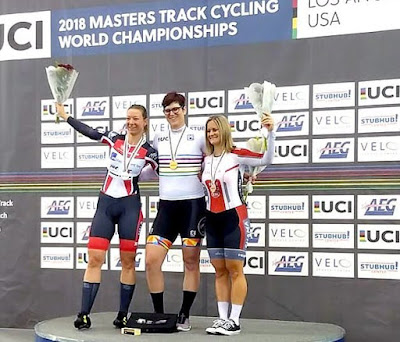 Rachel McKinnon (36; above, centre) won first place in a recent championship cycle race, for women in the 35-44 age group.

The competitor who came third wasn't happy, as McKinnon is a sex change rider. You can possibly see from the photo that he/she is a much bigger and 'better-built' person than the other two. In fact he doesn't seem to even try to hide the fact that he really is a man. He/she also seems to be lacking certain female elements in the upper chest department, which is a slight give-away.

Surely there is only one way to settle definitely what sex a person is, and that certainly ISN'T by asking them.

We are all born with sex chromosomes; XX for females, and XY for males. There are a few exceptions, but these are extremely rare. Our chromosomes at birth stay with us for the rest of our lives.

With 'gender choice' becoming almost tediously common these days, isn't it time that a baby's gender on his or her birth certificate was determined by chromosome testing, rather than a quick look downstairs? A standard XY Male can wear female clothes and make-up till the cows come home, but that doesn't make him a woman. I really don't think Ms/Mr McKinnon should be competing against women, even if it does sound a bit harsh.

I'm perfectly OK with any man who wishes to live as if he is a woman (and vice versa), but when it comes to taking part in sport it's not really in the spirit of competition.

The good old days of hefty Russian 'female' weightlifters, with 5-o-clock stubble, are over.

At least on the sporting arena, things should be equal. With Ms/Mr McKinnon I don't think they were.

Maybe he thought that 'MASTERS' meant it was for blokes.