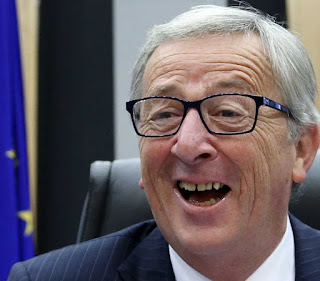 Darling of the cocktail bar, Jean-Claude Juncker, has once again made himself a laughing stock.

At a recent meeting in Freiburg (Germany), the self-important Juncker claimed that after Brexit, British planes will no longer be allowed to land on mainland European soil.

I hope he's told Lufthansa, Air France, Air Europa, TAP, etc, that they'll no longer be allowed to fly to the UK. They may not be happy!

He's also recommended that Brussels would impose a four day quarantine for pets; both arriving and leaving mainland Europe.

Meanwhile in Germany (where he made these profound statements) the ever-growing neo-Nazi group 'Revolution Chemnitz' has been rioting, attacking immigrants, and threatening to kill politicians and civil servants. Sadly this is not exclusive to Germany; although they have more experience of such behaviour than most European countries.

That, Jean-Claude, is the reality of what your wonderful European policies have given birth to, and they have nothing to do with either British tourism or family pets.

I wonder if dear Juncker ever discusses his more bizarre ideas with fellow Brussels Bureaucrats; I imagine NOT.

It's hard to believe that clowns such as Juncker are running the EU. It's no wonder that Theresa May has such trouble dealing with them.

Yes, ha ha ha; you may laugh Mr Juncker. But I'm afraid the joke is YOU.