Yesterday the Compact Royce went to receive two new front tyres. I had stupidly accepted an appointment for 8 am; it was hardly light, and it was almost too cold for shorts. 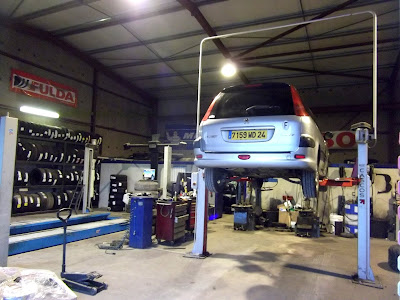 Anyway, the two new tyres were eventually positioned (€106.66). The process took about 15 mins, which gave me enough spare time afterwards to shop for a few essentials before her next important appointment.

This was with M Bressou at 9.30 am, for the car to have her biannual road-worthiness (ahem) test; luckily the wretched tyre kicking ceremony was completed before I'd even finished reading my magazine. 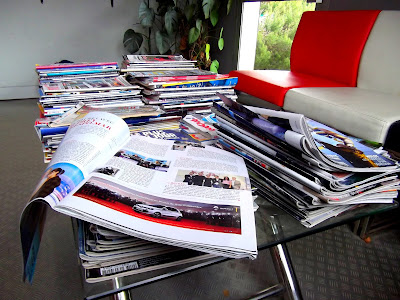 My lovely mechanic, M Bressou (Very large black beret, big Gallic moustache), made quite a fuss over choosing a copy of Paris Match for me (from within the huge pile above) to read whilst I was waiting. It contained, he told me, an interesting article about Mrs Meghan Sussex. I suppose it kept me amused for a while.

The old gal passed her test, and M Bressou was awarded €70. She's now good for the next two years.

p.s. I should mention that after my two new front tyres were fitted, and whilst she was still up in the air, the pleasant tyre fitter checked and adjusted the air pressures in both back tyres, and the spare (which was at near zero). Gratis. I've never known them do that before. What service; he received a well-deserved  pourboire!

It's the little things that count.