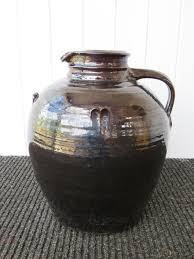 The above pot is by Trentham de Leliva, my one-time pottery tutor, and friend.

Trent (as he was known) was something of an enigma. Just to look at him you knew he was a man to be reckoned with.

He was tall and slim with a very 'lived-in' face. Otherwise I knew very little of him.

His home was in one of Brighton's most prestigious non-sea-facing crescents, and he always drove classic cars.

The last time we met was at a Garden Centre up by Brighton's Racecourse, where he was wandering aimlessly between the rows of plants. We had a short chat, talked of old times, and that was it. He'd seemed very pleased that I'd approached him.

Trent died not long afterwards in 2012, and the only thing I can now find about him (on the net) is this one rather uninteresting jug. Back in Oct' 2015 one of his pots had been offered on Ebay, but it received no bids.

A highly talented potter who has simply disappeared. 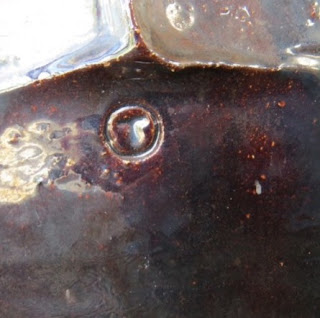 Just in case you own a pot with a capital T inside a circle stamped into the base, it would be by my old friend Trentham de Leliva; you should treasure it.