Where is The North?

Some cheeky wags at thetab.com have worked out where THE NORTH is by calculating how many Greggs pie shops there are per capita of population. Of course they are wrong, as you can see by their silly map (above), which looks more like a dividing line between the North West, and the South East.

As someone who was born in leafy stockbroker Surrey, I have always believed that THE NORTH began at Croydon, but I have now done considerable research into the matter, and I present my map which illustrates where it REALLY starts (below). 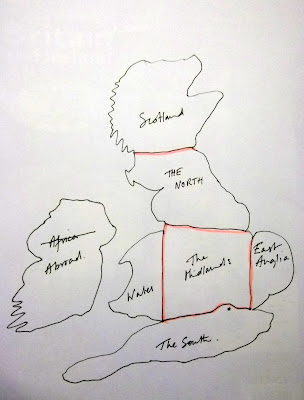 As you can see, The South is all that area below a line between the Bristol Channel in the West, to the southern banks of The Thames estuary in the East, including London (which is The South's major city).

The Midlands is everything in between The South and The North; excluding Wales and East Anglia, which are independent regnums.

The NORTH is everywhere above a line between Liverpool in The West, and The Wash in The East. It ends at a place called Scotland (which is an area where Whisky is made).

Other islands off the coast are simply known by their names, and do not require geographical pin-pointing.

I hope this quells any continued confusion.