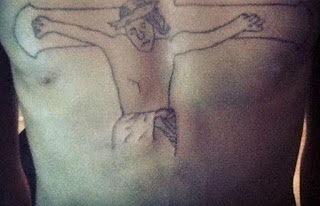 I'm not big on tattoos (I don't have any, as you might imagine), but I do rather like this one above.

When I was young it was quite common for those who'd done their National Service to return home with a Swallow, or a heart with a girl's name, or, if they'd been in the navy, an anchor, on their forearm; Popeye fashion.

It was usually the souvenir of a drunken night in some foreign port; probably later regretted.

The current 'fashion' for minor celebs (and those who idolise them) to cover themselves with acres of unidentifiable inkings, is to me horrific. Every time I see some poor girl with drawings all over her legs, arms, and chest, I see nothing but future regret.

What seems like a bit of harmless fun when you're 18, can easily become a nightmare when you're 25. I remember seeing a 'mature' woman on the beach in Ibiza who looked as if she was covered in bruises; on closer inspection (not too close) I realised that they were ancient tattoos that had grappled with time.