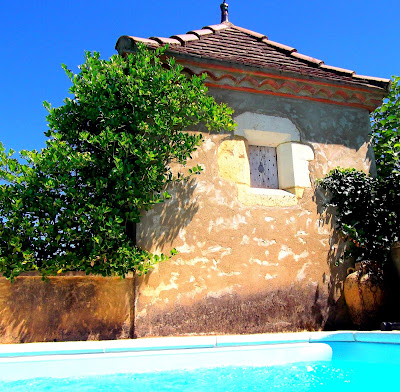 Given my time again, I would have done more building. It's a very satisfying amateur occupation.

You don't need a diploma to throw up walls in either stone, brick or concrete blocks; it's not difficult. It requires a radio (to relieve brain-numbing boredom), a string with a weight tied to one end, and a £2 level.

The fun bit is trying to make whatever one is building, blend in with what's around it. My Pump House certainly wouldn't have been the same without its cut stone window, hand thrown pinnacles, and greenery.

Much of the appeal of the area in which I live, are its ancient buildings. Many of our towns date from the late 13th century; the era of The Hundred Years War. Beautiful old arched shaded walkways, wood or stone pillared central market places, and decorative carved stonework openings, are commonplace.

It must be said that traditionally the most conscientious restorers of our local buildings have always been the Brits or the Dutch. They tend to have a natural respect for the integrity of an ancient building; far more than the natives. Not always the case, but in general this is so.

Inappropriate industrial roofing tiles are now very common. Bizarrely shaped window openings and plastic doors are incorporated into otherwise beautiful old stone-built cottages. No horror is too far-fetched.  There seem to be few restrictions when it comes to modernising ancient farmhouses or cottages.

Nowadays 'buildings' come in various unusual forms. One of our neighbours (and friend) is building a Holiday Village. He already has a 7 person 'Gite', and has been given permission to install several ready-to-go Shipping Containers which will be semi-buried beneath the ground in his field. I hear that the containers come complete with kitchen, bathroom, bedroom, etc, and apparently all they need is to be positioned, made as invisible as possible, then have the pipes and wires connected. That's it.

Both Lady Magnon and myself have surprised ourselves by our joint lack of concern about the project; there's no holding back progress!  Anyway, it would have been hypocritical of us to think otherwise, in light of the conversion of our Séchoir.

The entrance to his new 'Village' will be opposite an empty semi-ruined house on the 'main' road, so none of us will be directly affected.

Another friend who previously lived in a fabulous Yurt wanted to install several more as holiday accommodation, but was refused permission, which we've never really understood. I can't see why they would say 'yes' to Shipping Containers, yet 'no' to Yurts; there doesn't seem to be a great deal of logic in the authority's choice of holiday housing.