Almost time to toss that coin. 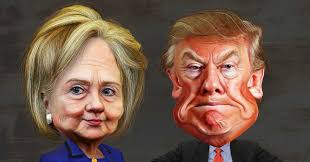 I have just heard that Obama has amassed more national debt than all previous presidents put together; that's some legacy! I hope he spent it wisely.

Of the two current hopefuls, Le Trump has promised to give back tax-payers money; La Clintone has promised to take more away. One presumes it is such electioneering that will swing voters one way or the other, rather than Mexican wall building, Trump's non-triumphs, or Hillary's Emails. All one knows from this side of the pond is that Socialism always upsets an economy, and Capitalism always improves it. Of that there is no question.

Of course those on the left of politics are not averse to raking in the cash. I heard recently that dear Hillary has allegedly made twenty one million dollars over two years, by after-dinner speaking to 'bankers'. I wonder why they gave her all that dosh? And did I hear Trump bragging that he makes 500 Million dollars per annum?

So, you've had your half-white Afro-American, now you'll have either an ex-President's wife of English Welsh and Scottish descent, or a German/Scottish orange painted billionaire  .

Once you've done with all this nonsense, maybe in a few years time you'll have a serious President who wins through merit, intelligence, and a genuine desire to improve standards across the board; regardless of his/her colour or sex.

I look forward to that day rather than November 8th 2016. I pity you!!