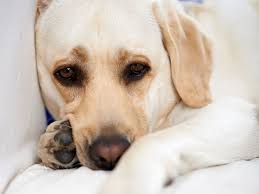 A few days ago we returned to find a recorded message on our land line phone.

The wife of a builder that we occasionally use, who has Labradors, wanted to know if we would take a 6 year old Lab' bitch who has been tied-up for the whole of her life (the picture is NOT of her).

Lady Magnon of course at once said 'let's have her', but being more practical I suggested that one dog was really enough.

I telephoned the lady and thanked her for thinking of us, and explained our situation. I also asked why the poor dog had been tied-up.

She said that the poor thing had been one of a litter from her own dog, and they had all found what she thought were good homes. She followed the progress of all the pups, and said that when she occasionally visited this particular one it was always attached. She was not pleased, and eventually demanded the dog back. She hoped we might take her.

It's a sad scenario, but many people in France treat their dogs this way. They have no idea how to look after animals, and think it enough just to feed and water them, then keep them tied to a kennel.

I don't know how much this poor dog will have been damaged by her lack of exercise and affection, but someone will no doubt have a lot of re-training to do. I would have liked it to be me, but it just wasn't possible.