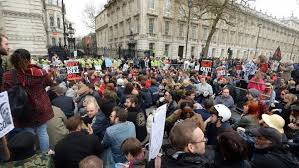 The UK has a very strange attitude towards wealth.

In the US, the making of money is applauded. People do not envy or hate; they attempt to emulate and achieve.

In the UK, those who educate themselves and do well financially are hated; even despised. Wealth is seen as cheating, privilege, or even crime. Anyone (excluding ex-Labour prime ministers, footballers, or musicians) who makes a personal fortune is derided as a toff or scum.

Of course those Brits who do make serious money are the ones who possibly employ the ones who complain (if indeed they work), but even that is derided by the 'chip on shoulder' brigade.

I know who I'd prefer to spend an evening in the pub' with, and it wouldn't be with those puerile protesters (above) who hate the Prime Minister simply because he has a few bob.

A nation without individuals who have ambition and drive is a nation bound for failure.