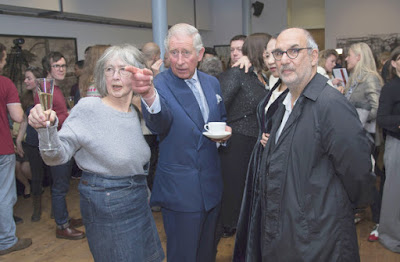 This has to be a favourite snap.

One of my favourite painters, Rose Wylie, chatting to the future King of England, with my old school chum (now somewhat disgraced) Alan Yentob.

In the days when I managed a London West End Art Gallery, I used to attend several Vernissages every week. Even though the gallery with which I was associated didn't sell modern work (other than cartoons), I was still on the lists of most major galleries as one who should come sip wine and pronounce pompous comments about the rubbish they had on view.

In the late 60's, 'Private Views' were mega celeb-fests; there were always famous faces around. But those who always attracted my attention was a group of four nuns who would regularly turn-up at the most unexpected shows. I always wanted to ask them who, what, where, and why, but I stupidly respected their privacy and left them to their wine. We were on nodding terms, but that was all.

I didn't buy modern paintings in those days (I still don't), but when I look back to some of the painters whose early shows I attended, and had I bought some of their stuff, I would now be worth almost as much as bloody Trump.