An Interloper; the pros and cons. 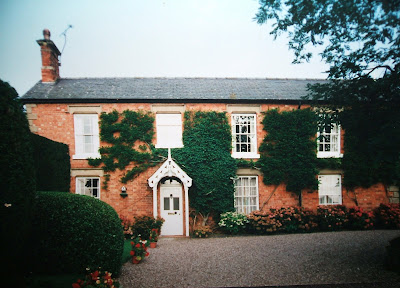 My life in the UK was spent between Sussex/Surrey (where I was born), Shropshire/Welsh border, and London. I really know very little about other parts of Britain, other than where I was at school and my knowledge of that area is pretty limited too.

I spent almost four years living in the West Midlands (in my people's house above), and had very mixed feelings about the place.

There is no question that the people of the Home Counties, and the people of the Midlands have a very different attitude towards hospitality. I'm not talking about those who were fortunate enough to have been educated away, or attended country-wide universities, but those who remained glued to their particular corner of the country.

I loved the countryside up there, and especially just over the border into Wales, but I never felt at home there. The locals had an uncanny way of making you feel like an unwelcome stranger, and they seemed to delight in as much.

I did all the usual things that one does to try to make oneself accepted into village life. I became a regular at the pub', I ran the local Youth Club for a year, I reintroduced the annual Horticultural Show (which had been allowed to lapse), I raised money to send a group of 8 village children on a fabulous free adventure holiday to Bavaria (my high point), and I organised fund-raising to buy an electric wheelchair for a local girl who'd had an accident abroad; amongst other things. I like to think that I did my bit to integrate.

However, none of these things really helped me to become properly accepted, and when I eventually left the area I was extremely happy to return to a much more sociable Sussex, and France.

I had a friend in the village who came from Liverpool. He once asked the village garage owner how long it would take for him to be accepted into village life. The garage man replied "Oh, at least TEN years". My friend replied "Remind me to leave in NINE".

p.s. I don't wish to sound anti my old temporary home area, because I'm not. It's actually one of the places where I'd still like to live. But being friendlier would have cost them nothing; I can't see the appeal of being inhospitable!