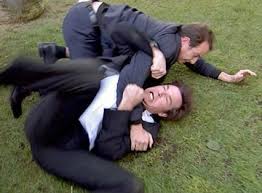 Fights are never as they appear in cowboy, or other, films.

One of the ghastliest flats I had in London was in Marylebone, in Paddington Street W1; just down the road from the Beatles 'Apple' shop.

Although the address suggested it was quite smart, in reality is was a damp Dickensian cess-pit.

One evening I returned to the house and found my flatmate, Nick, rolling about on the floor, grappling with our landlord. Not what one expects to encounter after a hard day's work.

I stood watching them for a while, not knowing quite what to do, as their arms flailed about only occasionally making contact.

Finally I decided that the best thing to do was to bring the fight to an end, and I prepared myself to hit the landlord. This wasn't easy as they were rolling around on the floor and not presenting me with a good opportunity.

Eventually the landlord seemed to be getting the better of things, and managed to be on top; I threw one sharp punch to his chin. He dropped to the floor and my flatmate pushed him off triumphantly, and stood up.

"What the bloody hell was all that about?" I asked.

"Oh nothing" replied Nick; and that was that.

When the landlord revived he told us to be out of our flat before the following mid-day; which we were quite happy to do.

So, back to my opening sentence. Fighting is never a question of exchanging perfect punches to an adversary, they are usually much more like the weird (and slightly comical) encounter I described above. I only offered one punch, and my fist hurt like crazy. Imagine punching a brick wall.