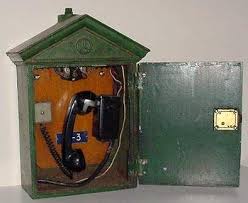 In a nearby village there was a 'telecom engineer's' phone box (not unlike the above) built into a wall outside the Mayor's office. It was made of cast iron, and was built like a safe, and was for the exclusive use of engineers who were repairing local land lines.

One day, after an engineer had been using it, a villager noticed that the key had been carelessly left in the keyhole, and very sensibly he took it home for 'safe keeping'. He had several copies made of the key, and gave them to all his friends and family.

From then on if villagers had a long distance call to make, they always used the box. Free long duration calls were being made to all corners of the earth. Rumours abounded that after dark queues would form outside the box; everyone wished to take advantage of this heaven-sent miracle. The scam lasted for several years.

Eventually the Telecoms Company realised that something was amiss, and the phone box was removed. The villagers were not happy and complained. Their complaints fell upon deaf ears!