A load of cock. 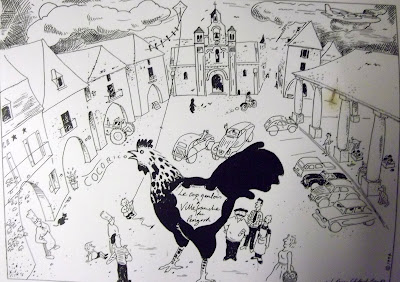 In 1994 there was an event in our nearby bastide town (above) that caused something of a national stir.

It concerned a couple of rather arrogant gay antique dealers who had quit Paris to settle in this small and very quiet town.

They rented a shop, they rented a house out in the country, and everything seemed to be going OK. Then one morning they woke to the loud crowing of a nearby Cockerel, then the next day, and the next; and it all became too much for them. They asked the farmer to instruct his Cockerel not to crow in the early mornings, and the farmer told them to effing well eff-off back to Paris.

Tension arose between the antique dealers and the farmer, which finished with their dispute going to court. The French national TV stations soon got hold of the story, and it went nationwide on the evening news.

Law is often an ass (as we all know), and the two men were eventually awarded ONE FRANC in damages, and the farmer was instructed to silence his Cockerel.

The small town was so enraged (and amused) by the verdict that they a held a 'Country Fair' in protest. There was a huge procession with children holding aloft pro-Cockerel banners, lots of Cockerels were let loose in the streets, and there was free wine for all. The two antique dealers were made to feel like a couple of right plonkers.

Above is the drawing I did to commemorate the event. The antique shop is still there, and the two men still as unpopular as they were back in 1994.

N.B. The lightning strike pin-points the position of their small shop.