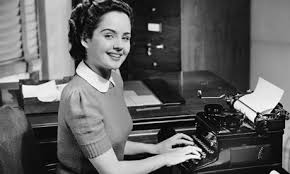 Between school and college I had three jobs. Trainee Stockbroker (blue button), Art Gallery Manager, and Antiques Dealer. For some bizarre reason, two nights ago I dreamt about the gallery.

The Fine Art Gallery was situated in Devonshire Street W1, next door to Odin's restaurant (of Peter Langan fame). I originally went in to see if the owner would be interested in buying some of my dreadful 'impressionist style' paintings (which I had knocked-up at school).

Nicholas (Miklos) Vilag (an Einstein doppelgänger) said 'no thank you', but asked me if I'd be interested in a job; I replied 'yes please'. On hearing this he went to the top of the back room stairs and shouted down in his stentorian Hungarian voice "Richard... you're fired". I hadn't even started my new job, and already I felt bad. This poor young man came up from the storage room, gave me a withering look, grabbed his coat, and departed.

My workload soon became too much, and I asked Nicholas to hire me a secretary. He chose an unattractive wire-haired Swiss woman of about 25, called Arianne, who I soon discovered to be totally useless. He sacked her and replaced her with a slightly older woman who was 99% MAD. She spent all her spare time attaching feathers to the strings of her baby grand piano, so that it made a horrible noise. She was also totally useless as a secretary, and we soon got rid of her too.

I stayed at the gallery for about a year, in which time I met Stravinsky, became friendly with Paul McCartney, and had my photo taken by Nicholas with a naked 'high class call girl' on my lap. Life in the back room of the gallery was never dull.

The dreadful Arianne was the subject of my dream (nightmare?) two nights ago; goodness knows why she should suddenly invade my night-time peace! I hadn't thought about her for over 40 years.

I woke up remembering all the horrors about having had an inept secretary; something I've never had to deal with since, and certainly will never have to again;..... thank gawd!


LATER: This must be a record, because I've just had another strange dream (unusual for me). I was sitting in a pub next to an attractive woman of a certain age. She started to make 'advances' (nothing unusual in that), and was pressing her face gently against mine. The strange bit was that I could actually feel the softness of her skin, and could actually smell her sweet powdery perfume. I don't remember ever dreaming aromas before; it was all rather pleasant.