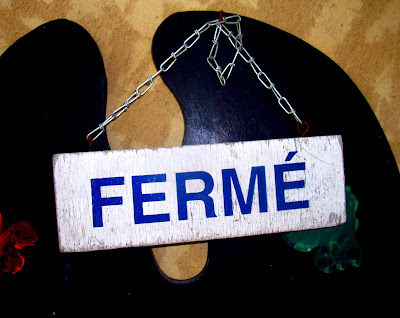 As soon as the month of August appears on a Frenchman's calendar, he closes the shutters and goes on holiday.

The major supermarkets, train services, and hotels remain open for business, but don't try to get a plumber or an electrician to come to your aid; he'll just say NO.

Signs saying Congé Annuel suddenly appear everywhere. Doors are bolted, and that white camping van that's been parked behind the house for the past eleven months becomes conspicuous by its absence. They're all on holiday, and they won't be back before the 1st of September.

It's the same every year, and it's bloody, bloody, annoying.

Happy Lammas. I hope you all remembered to say 'White Rabbit, White Rabbit' this morning. I did.

I also made a point of getting up before midnight to see the Blue Moon; well, they do only appear once in a Blue Moo......