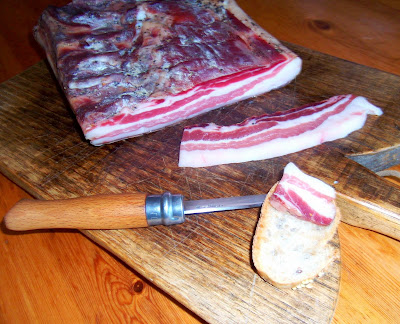 Ham can be made from any part of the pig, but traditionally the leg, the shoulder, and the belly.

This, above, could either be called bacon or ham, but it is specially made to be eaten raw; so I shall call it ham.

It is dry-salted for one week (with the addition of some brown sugar and roughly ground black pepper), then hung-up to dry for about a month; during which time it could also be cold smoked.

One could just fry it like bacon, but that subtle flavour of 'Parma' type ham (the delicious fat just melts in your mouth) would be lost. Best to eat it in thin slivers with bread and unsalted butter, and maybe a glass or two of rouge.

It's quite possible that such delights are unavailable where you live, but making it at home is child's-play! Just make sure you find a supplier of really good quality, naturally reared, pork belly; and buy the thinner fatty end.

Hugh Fearnley-Thing's recipe can be found here, or see his 2001 'River Cottage Cookbook'.

N.B. This is not the same 'bacon' that I posted about some time back; that was proper bacon, this is proper ham!