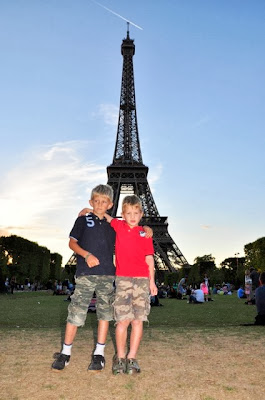 I genuinely believe that travel, being with family, socialising, eating out, visiting world-famous sites, attempting to speak other languages, and generally doing non-academic things, is possibly the best education any child could have.

It didn't seem so at the time, but I'm certain that my own time abroad, as a young person, was far more educational than 1000 Geography lessons.

This may sound strange, but I can clearly remember when about 8, on my first visit abroad, being quite surprised to discover that in France they had classical orchestras; just like we did at home. On reflection, I suppose the only things I'd ever previously learned about our near neighbours were the dates, protagonists, and locations of wars, and I'd ended-up thinking of them as an uncivilised, bellicose, people.

On that same first visit I was taken to a wonderful open-air restaurant (somewhere in Normandy) which boasted a stream running between two distinct sides of the semi-open-air 'building'. Every so often a chef would appear with a giant net, and scoop-up a couple of kilos of wriggling silver 'tiddlers' which were immediately dropped into a huge vat of boiling oil. They were then scooped-out almost at once, lightly salted, and served to the eager diners; including myself. This to me, aged 8ish, was the height of sophistication.

Symphony orchestras, and dining with flourish; why had I never been taught about such things at school? Maybe that was the start of my life-long love of France, but no thanks to my Geography teachers.