Summer Delights. No 2, Tomatoes for Brekkers. 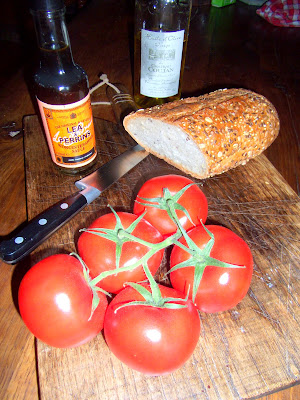 OK, there's no breakfast to compete with bacon, eggs, black pudding, and a few gently fried lambs kidneys; but coming a close second is this wonderful Summer breakfast that people tend to overlook..... Maybe it's the downright simplicity!

Every household has the ingredients for this rustic dish of Tomatoes on Fried Bread.... they are 'a couple of tomatoes from the garden, and bread'.

I fry the bread in plenty of good quality Olive Oil until browned and crisp (I do one side only), fry the lightly salted and peppered halved tomatoes in the same pan until softened, and carefully position them on the fried bread. The whole is then drenched in Worcestershire Sauce (only wonderful Lea and Perrin's will do).

This recipe, and others, can be found in my book 'Cro's Egg sucking for Grandmothers'!

Nota Bene: Worcestershire Sauce is occasionally called Worster Sauce in parts of Essex and the North of England, and always called Worcercesterashoreshire Sauce in the USA. It's all the same product, but much better known simply as Lea and Perrin's. Life (breakfast) wouldn't be the same without it!