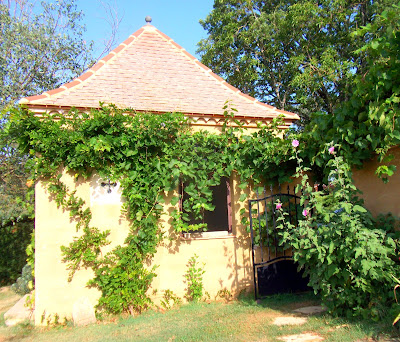 It was only a year and a half ago when we planted the Wisteria against the wall of our 'tower'. Since then I've re-routed some Vines, put in a couple of Clematis and a Hydrangea, and behind the open gate there's a Fig.

Already the foliage is doing what's asked of it, and the small building is beginning to look as if it's been there for ages.

We are still sleeping in there, and other than it having been swelteringly hot recently (no electricity for a fan), it's been wonderful. We've been waiting for the traditional August storms to make our Summer's enjoyment complete, but they've all proved to be half-hearted affairs.

Whatever happened to those seriously frightening storms of mid-August; they seem to have disappeared!