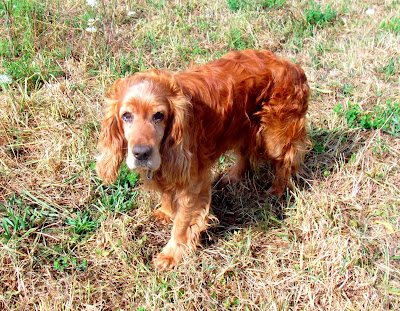 We call this dog 'Brown job'. He belongs to some people who live about 2 Km's away.

Our neighbours used to have a dog (the one we called The Black Bastard), and he and Brown job were inseparable friends (a bit like Monty and Bok).

Eventually, about two years ago, The Black Bastard was callously given away, but Brown job still walks the 2 Km's each day, crossing two roads en route, to see if his friend has returned.

It's all rather sad, as no-one really cares about poor old Brown job. He's fed and watered, but that's as far as it goes; he's not even very friendly. But he continues to walk for miles each day, rain or shine, hoping to see his good friend.

I wish there was a happy ending to relate, but that's it. The solitary story of the travelling 'Brown job'.