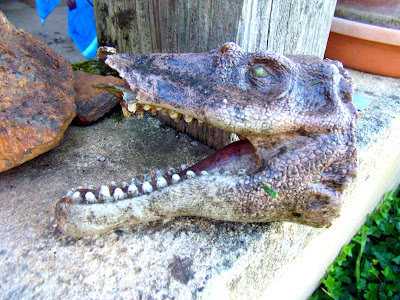 The dogs bring home some pretty wierd things, but this.... YUK.

Being possessive, Monty wouldn't let me inspect what he'd found (until we arrived home), but I could just make out the teeth; I presumed it was a Badger head, or something equally disgusting.

But no; it was a large plastic Crocodile head which he'd found in a newly cut hay field.

The question remains; how did it get there, and where's the rest of it?