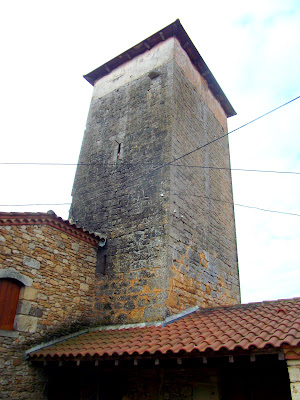 This magnificent 13th Century tower is on the small farm/vineyard about which I spoke yesterday.

The lovely farmer's wife (also see yesterday) seemed quite surprised when I asked her about it. I suppose if you live with something day in/day out you become blasé about such things. But she was quite happy to relate this tale, which she found quite amusing.

The tower originally stood apart; the other bits (the winery) being added much later. It was built simply for defence during the early period of The Hundred Years War; when naughty Englishmen were out to conquer all they encountered. Whether this was under French or English control, I don't know; property changed hands often in those lawless days.

The story is that the 'Seigneur' (as she called him) had heard that he was about to be attacked, so ran up his tower and barricaded himself in with his valuables, family, and food supplies. The enemy fired arrows, threw stones, and probably shouted insults, but he wouldn't surrender. Eventually they decided to burn him out, and built huge fires all around the base (the scorch marks are still there). I presume that did the job, and they probably all died of asphyxiation.

I asked her if they used the interior for anything these days. She replied 'no'.

If it was mine, I'd make a study right at the top, and would be typing this from there.... but it isn't mine, so it remains empty. Shame.