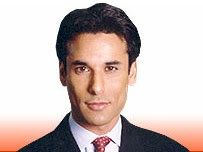 Most people in the UK will recognise this face; he is the BBC's newsreader Matthew Amroliwala; and we just happen to have attended the same school. For an unrelated matter, I was looking him up on Wiki.

The first thing that grabbed my attention was that he is a ZOROASTRIAN.... A what?... Is that a fan of Zoro movies?... Never heard of it!

So, I looked it up (again on Wiki), and was surprised to read that it was once one of the world's largest religions; founded in the 6th Century BC in Greater Iran (although Zoroastria himself dates from aprox 1500-1200 BC).

I was also surprised to read that, rather like Judaism, all adherents must cover their heads at all times, which, I can assure you, Matthew doesn't... I wonder if they're also supposed to wear black capes?

Anyone heard of Zoroastrians?
Posted by Cro Magnon at 06:44