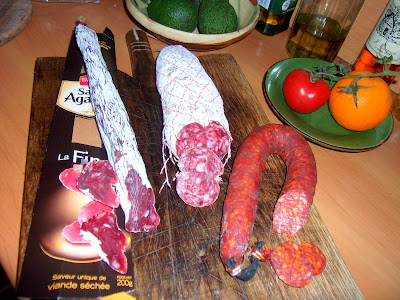 As you might have already gathered; I'm rather keen on charcuterie.

The Chorizo, on the right, will be known to almost everyone. A spicy Spanish sausage either eaten raw, or cooked to add wonderful intense flavour to Mediterranean dishes. I often use it, finely sliced, as the basis for a pasta sauce.

The middle sausage is the classic saucisson of France; the 'Rosette de Lyon'. A sausage usually eaten with a selection of charcuterie, with bread (and maybe butter) as an entrée. The one above is good; but no more than average.

Finally, the one on the left is a recent discovery. It goes under the name of St Agaûne 'La Fine', and is a very meaty (non-minced) sausage; almost biltong-like, but less hard and dry. It has a very pronounced almost sweet flavour, and is probably best kept for special occasions. For this one I would definitely recommend unsalted butter with your baguette.

Discovering new charcuterie is one of life's pleasures (unless you're Jewish or Veggie), and something from which one should never be deprived. Bon app'.
Posted by Cro Magnon at 05:56