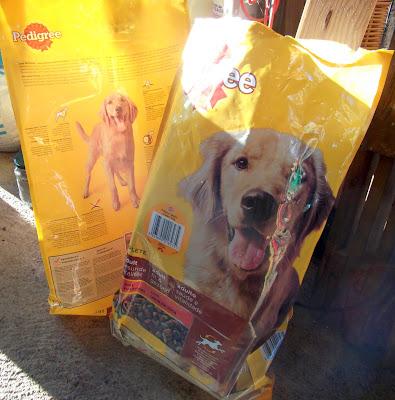 Ever since Monty was a wee slip-of-a-pup, Lady Magnon would only ever buy him food that had a picture of a Lab' or Retriever on the pack. In his early days it had to be a cute Lab' puppy picture; nowadays it has to be a full-grown, alert, and attractive adult.

I'm pretty sure that most dog food for adult, full-sized dogs is much the same; it's just the picture that changes. OK, certain dogs may need certain extra vitamins, but in general it's just 'dog food'. The stuff she used to buy was UNBELIEVABLY EXPENSIVE; at least the stuff I buy now (above) is affordable.

So I'm wondering how much we really buy through photographic association.  Personally I hardly ever buy 'branded' goods, but if I did, and I was to associate packaging illustrations with the type of person expected to purchase, then I would never buy Scott's Porridge Oats, Uncle Ben's Rice, or O Fokk-Mee's 2 minute rice noodles.

However, I might be tempted by a few litres of Sir 'Humpty-Dumpty' Fortesque-Strawberrynose's Merlot-in-a-bag (with free handy straw). Especially if the illustration was of me!
Posted by Cro Magnon at 06:07