Return of the Birds of Paradise 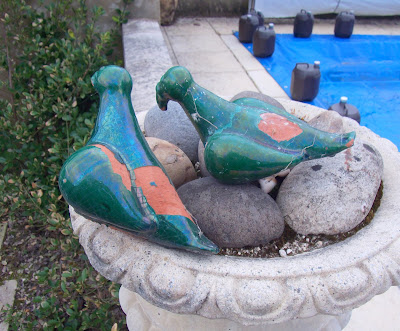 Back in 2004, when we built our pool, I decided that it should be very much a part of the house and garden; not a separate entity. I landscaped all around, planted shrubs and trees, and built the 'pump house' to resemble a small pigeon tower (or some might say, thunder-box).
The icing on the cake was to commission a young local 'struggling' potter to make the two finials (or pinnacles). They were to be glazed in dark green and topped with traditionally shaped birds. He took quite a while to make them, then one exploded in the kiln and he was forced to start again from scratch; we had already been waiting for over two months.
Eventually he finished, and they were put in place amongst much downing of Champagne. They looked wonderful. 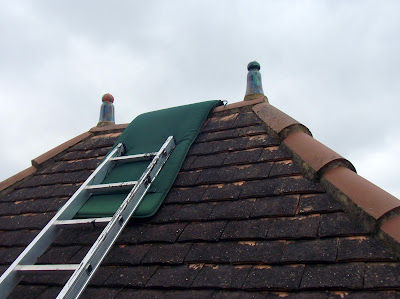 Unfortunately, in his inexperience, he had not fixed the birds correctly onto the main body of the finials, and during one long, wet, and frosty Winter, the two birds parted company with their bases and fell to the ground; luckily without too much damage (one lost a beak, and both lost some glaze). 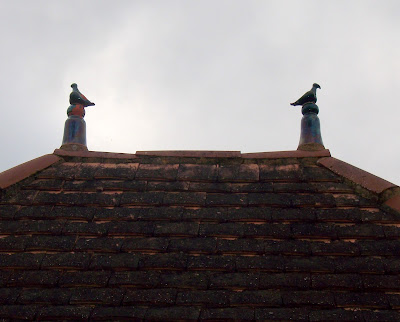 Their replacement was top of my Winter 2012 'to do' list, and today I had no further excuses. Don't you think they look so much better? I've glued them back on with one of those mastic pastes you mix with a hardener.
Just in case you were wondering, after considerable discussion (back in 2004) I decided to have one bird facing due East to watch the sun rise, and the other facing due West to watch it set. I couldn't come-up with anything more original.
Posted by Cro Magnon at 06:28