The Legacy of BLM. 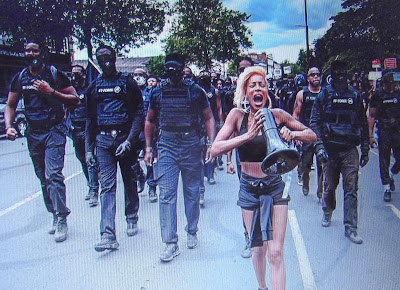 This young lady leading her troops through the streets of Brixton is 29 year old Imarn Ayton, who I spoke about back on 18th June. I believe that when she's not rabble rousing, she's an out of work actress, with 'racially appropriated' dyed blonde hair.

Ms Ayton claims to have a minimum of 100 martial-art-trained troops. She fails to say who or what they wish to fight against; we can but guess.

The sort of behaviour shown by Ms Ayton and her followers makes those 'do-gooder woke white folks', who previously marched about with BLM banners, look rather pathetic. If only they'd listened to what others were saying, and paid attention to what was going on, they might have stayed at home. If they'd read Ms Ayton's manifesto; they certainly would have done so. Knee-jerk reactions are more than often misguided, even though most of us deplored what happened to provoke the original BLM movement.

It's all rather reminiscent of Sir Oswald Mosley's nasty black shirted boys. Some people never learn!