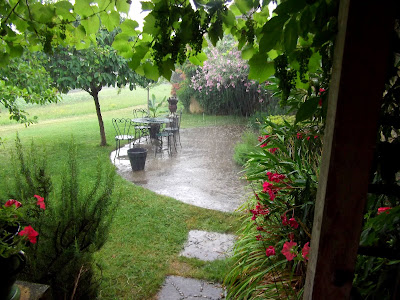 I'm sitting here, in front of my laptop, feeling very tired and slightly depressed. I slept less last night than usual, even less than my regular three/four hours. The phone, and internet, were down, so I couldn't even listen to my internet radio. During the first part of the night I heard Billy being sick, so got up and cleared the mess. When, at 5 am, I eventually got up, I found he'd peed on the kitchen floor, so I had to clear that up too.

On my morning walk with Billy, at about 7.00 am, it started to rain when we were about a mile from home. Both of us ended-up soaked.

It is now raining intermittently, and looks likely to continue all day. It's the sort of day that I really detest.

I have taken advantage, to a certain extent, by catching up on Emails, letters, thanking people for stuff, etc. At least I'm now almost up to date. I probably won't go outdoors much.

Breakfast (for me) was left over chicken tagine with merguez, lunch will be vegetable soup with a beetroot salad and maybe some cheese, and dinner tonight will be spaghetti with a minced beef and tomato sauce. Tea, if we can be bothered, will be Lapsang with lemon jaffa cakes. It's hard not to think about food on a day like this.

I look outside, and even though I mowed everywhere just five days ago, it already desperately needs doing again. Our next promised warm sunny day is for tomorrow (Monday), so in the meantime I simply had to watch it grow.

For a bit of excitement, I might light a fire later in the day, otherwise it's drawing, reading, and maybe a crossword. If it's really foul in the afternoon, I might even watch the country house finding TV programme.

Later in the afternoon, when Lady Magnon was taking Billy for a short walk, he seemed to have an epileptic seizure; and to make matters worse, he has just been been sick again. Having lost two dogs to suspicious circumstances makes us wary. Having had someone threaten to kill one of our dogs is always in our minds.

There; that's it. It's been a foul week. Being in lockdown against the weather is almost worse than against the virus.

It's now the following morning, and Billy seems OK, but we remain vigilant.

What a difference some sunshine will make. It's forecast to be 28 C today!!!