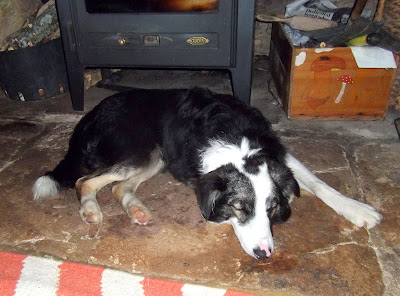 Being neither 'mad', nor an Englishman, he stays indoors during the extreme midday sun.

We have established that he doesn't like the heat. He finds a nice spot somewhere on an ancient stone slab, and sleeps until it's cooler.

He loves the early mornings, and equally the cooler evenings, but in between times he's been settling down to snooze in front of Wimbledon or The Tour until things calm down a bit. I really ought to do the same. 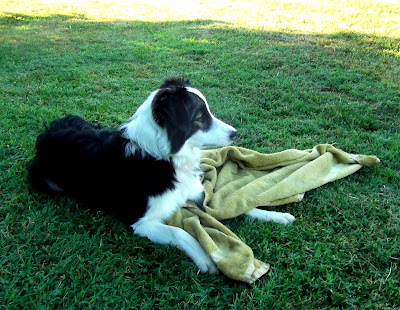 On yesterday morning's early walk he saw a baby Fox and a Deer. I'm pleased to say that he did half-heartedly chase the Deer, but soon gave up.

Of course, like all dogs, Billy has his very favourite toy; and for the Summer it's an old towel that we used on his bed. As bedding he didn't think much of it, but as a toy he'll play with it for hours; dragging it around the garden.

If only all our lives were so simple.