I have a particular liking for this type of disjointed, stream of consciousness, painting. Rather than looking at a subject and recreating it in 2D, the subject is invented, images amassed, and the resulting combination brought together to create a whole. 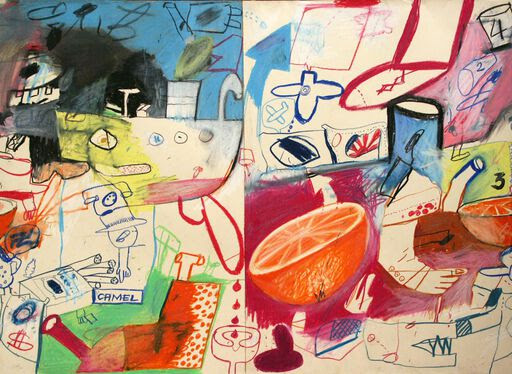 85 year old American painter Peter Saul was the first artist I encountered who took this to extremes, and, as a student, I found it very exciting. I later discovered Ron Kitaj (also American), who did much the same thing, combined with philosophy and exquisite draughtsmanship.

Saul's work later became highly coloured, political, and cartoon-like, and (for me) it lost much of its cutting edge.

His work is socially aware, insolent, and punchy. Another painter whose work I'd very much like to see hanging on my walls.