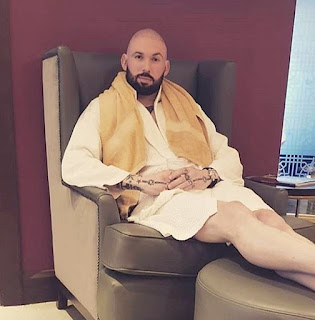 Many of us dream of spending the occasional weekend being pampered in a luxury hotel and spa (not me). My own mother used to unwind at Champneys on occasions, in the days when such things were still quite a novelty.

33 year old Luke Jewitt (above) is one such dreamer. He often spends his weekends, along with his mother, at a hotel and spa in Birmingham, where for a mere £140 a day, it allows them the luxury they both hanker for. Nothing particularly special in that, but HIS time there IS rather special.

In fact Mr Jewitt is currently in prison for his part in importing 3.6 tons of Cocaine and Cannabis into the UK.

He was jailed in 2016, and is just 3 years into his 10 year sentence, but the caring (and very considerate) UK prison authorities have given him permission to stay at the hotel, and use its spa, at the weekends providing that he promises to return to the slammer afterwards.

Well I do think that's very nice of them. No doubt if he asked for a couple of weeks away in Marbella, they would grant permission for that too!

It's a great life for criminals in the UK. If you don't get caught you can make a fortune, but if you do get caught, you usually keep the loot and spend some time in a reasonably pleasant secure 'hotel style' prison, where almost everything is available (including regular visits to a spa).

He even has time to pose for photos; you would hardly believe that he was actually a jailbird.

Welcome to 21st Century Britain. Eee, it's a grand life!