May Day in Paris. 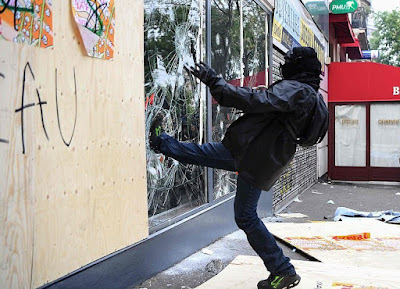 Ah, May Day in Gay Paree. It's what dreams are made of!

May Day is celebrated in many different ways around the world, but here in France (and Paris in particular), the left-wing Black Bloc group celebrated by burning cars, throwing pavées at the Police, and smashing as many windows as possible. This young man (above) has actually removed the protective boarding so that he could get-at the glass. Who said 'romance' was dead?

Paris was once again ablaze, and the air thick with acrid smoke and Tear Gas.

Well done chaps; another fine example of Socialist ideals in action; Messrs Marx and Engels would be proud of you.