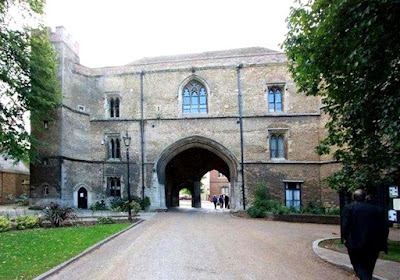 An entrance can make all the difference to a garden, one's home, or even a Football ground. No matter where it's found, it gives you advance warning of what is to come.

At age 13 I saw the above 'entrance' (The Porta) for the first time, and frankly it filled me with serious foreboding. I can remember that moment even today.

I was making that great leap from Prep' school to Senior school, and had been summoned to meet my new prospective headmaster prior to sitting the dreaded 'Common Entrance' exams, but seeing that austere building made me wonder if I'd chosen the right place. Even Dartmoor (below) had a more friendly appearance; not that I've visited it. 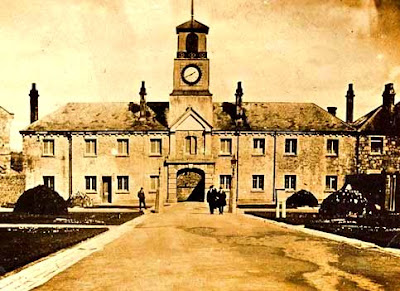 At my current school I'd been a senior boy, partly in charge of my juniors; but here, once inside this great arch I suddenly became a mere quivering junior again, with the senior boys looking more like grown men or angry prison warders than fellow pupils. It was a shock for which I wasn't prepared.

Luckily I passed my exams and was offered a place; surprisingly complete with a very small Latin Scholarship bursary. The ancient buildings all soon became familiar, and I quickly forgot the feelings of doom that had originally beset me.

The Porta is actually a much younger building that the others that surround it. Built between 1396 and 1417 it was originally the entrance to the monastery where fellow 'old boy' Edward the Confessor had learned his ABC. Later it became the location of a 'Bishop's Court', and even contained a small prison. Personally I remember it mostly as a venue for theatre and music events; it's where my thespian talents were discovered and honed! My interpretation of 'Mortimer' in Arsenic and old Lace was legendary..... legendary darling!