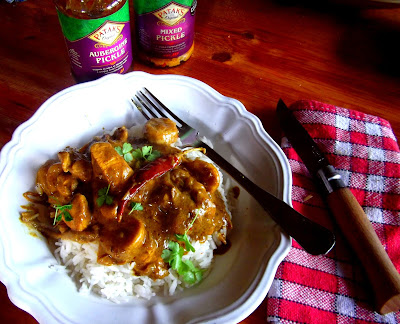 My late father was NOT a cook. However, once a year he would 'rustle-up' a curry, which, when I was very small, seemed surprisingly exotic. He had possibly learned the process from his older brother who'd been out in Ceylon (Sri Lanka).

There were usually four main ingredients; Onion, Chicken, Banana, and Sultanas; as well as all the spices.

Quite recently I made a Chicken curry, which we later decided would have benefitted hugely from the addition of some Banana, so last night, when I made the same Chicken curry again, I decided to do just that.

I haven't eaten a Banana enhanced/enriched curry since the 1960's, when such things were still popular, so this was more a 'memory lane' meal than gastronomy. The above is a dreadful photo, but I think you can just about make out the slices of Banana.

I must say, it was really good; we both loved it. My memory was correct.